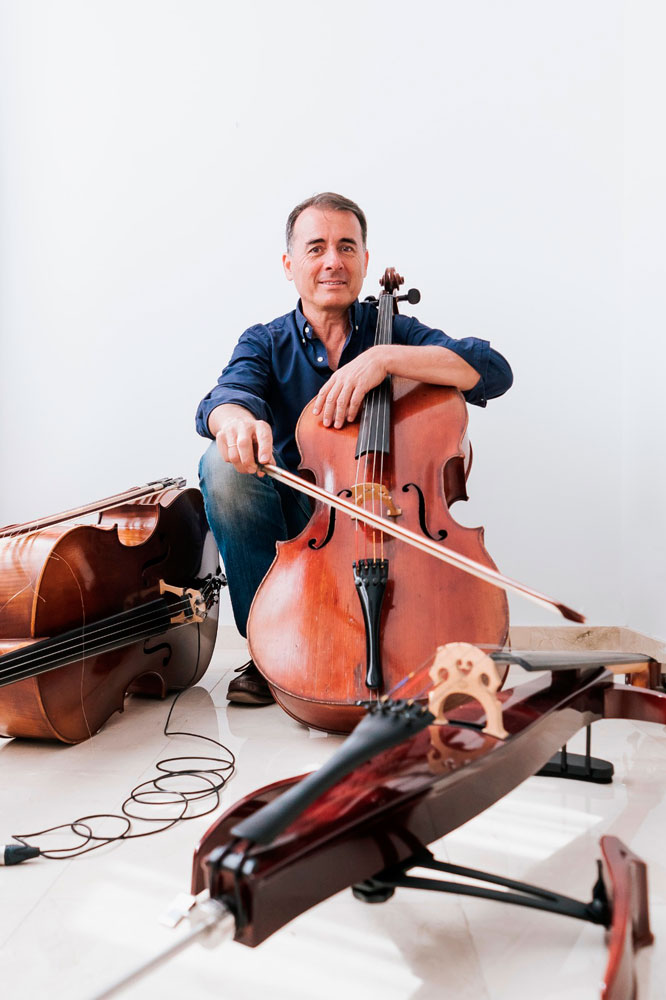 Cello teacher and self-taught guitarist. Composer. He studied with Lluis Claret and Raphael Wallfisch. He has been a member of the Tenerife Symphony Orchestra and has belonged and composed for dance groups, theater, contemporary music, alternative, jazzrock, fusion, multimedia, audiovisual … He has a large number of recordings of his own songs in CDs and other formats. He is currently Professor of cello at the Conservatorio Superior de Música Canarias and Conservatorio Profesional in Santa Cruz de Tenerife. He is a member of the group Major Tom Project together with Samuel Aguilar and also a member of the group Iki-Gai Tube with Axu Peña.

Grateful.
The destiny of life leads us to a collaboration between Malaysia and Spain.
God bless the turns of life.

In you
I´m coming to look for me

My Soul
My breath
I´m nothing without you

SUITE FOR CELLO AND TEXTURES

In the music of Miguel Jaubert, in his lyrical impenetrability, in that micro-world of bars, there is the revived past, the contemporary present and the eschatological future. Resilient shades, melodic counterpoints, overlapping rhythmic structures, long cadences that oppose agitated tonal condensations, very early principles that announce a slow journey finally end up finding their harmonic backwater, all these elements give form, among other nuances, to a novel proposal, original and advanced. A proposal to listen from calmness and coincidence. A round trip ticket to the place where we live. A journey towards the memory of music.

Very happy and grateful to receive three awards at the prestigious IPA 2019 awards in Los Angeles- USA, two for the videos presented by our Iki-gai Tube platform: “3718-Silence” Second prize and “0 Of Absence” Honorable mention , and also for Axu Peña for the photo “Hidden in the shadow” Honorable mention. “3718-Silencio” has already been awarded with a Second Prize at TIFA 2018 Tokyo International Photo Awards and a Third Bronze Award at MIFA 2019 Moscow International Photo

Major Tom Project is an open platform that searches for alternative sound spaces and bets for innovative forms and languages outside any possible classification without any kind of prejudice. Miguel Jaubert Ríus and Samuel Aguilar Pereyra are professors at the Upper Conservatory of Music in the Canary Islands. Taking their solid classic formation…
more

InDrift is a live performance group founded by four artists with an unconventional heterogeneous mix of talents and backgrounds. Through the interaction between its members different artistic vocabularies are combined and merge into unique new expressions. InDrift is a special confluence precisely because of the baggage…

more
Tricústico, one of the strongest musical initiatives in the Canarian music scene, formed by Miguel Jaubert (guitar), Alberto Méndez (bass) and José Pedro Pérez (percussion), was an experimental group in which the amalgamation and fusion of Jazz with different styles are developed.
more

OWIN’EK is a duo integrated by Miguel Jaubert and Rafael Pinillos. It is a proposal committed to the new musical forms that build electroacoustic from complex and unstable textures, whose contours are highly dynamic and discontinuous. Throughout their career, this ensemble has collaborated with artists such as percussionists José “Pepucho” Hernández or David “Perreko”, having recorded with the latter the album Wes’ek lat-wes (2014). Returning to the original line-up, Owin’ek records the Cd Zig-fluzz (2015), presented at the Tenerife Auditorium as part of the NUMAcircuit festival program…
more

Instagram
Grateful to receive Honorable Mentions in the pres

Five minutes are enough to dream a lifetime, that

Three years ago in La Palma (Canary Island) with P

“INVENCIBLES”, F. Ortí. video for the day of